Keen-eyed residents will have spotted machinery being moved by barge to the end of Southend-on-Sea Pier so supports can be put in place ahead of a new public toilet block being built. 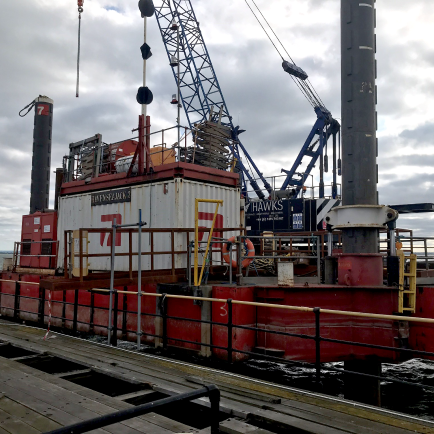 The piling barges arrived on Thursday 12 August at the Pier head and will be there for roughly ten weeks as work is done to put new support piles, steel beams and bracing in place, to help provide additional support for the iconic seafront structure.

The structural support is taking place ahead of building work to install new public toilets to replace the original toilet block destroyed by fire in 2005 and includes an estuary viewing platform on the floor above.

Cllr Martin Terry, cabinet member for public protection and responsible for pier and foreshore, said: “This is part of the cabinet’s commitment to invest £2.5 million into Southend-on-Sea Pier, the jewel of the town’s crown. As the longest pleasure pier in the world, it is vitally important there are enough public toilets in place for residents and visitors, and I am delighted that we continue to see an impressive number of visitors to our pier.

“This work was undertaken following consultation with residents, who told us they wanted more facilities and attractions at the end of the pier. Seeing the piling barges in place is the first step to getting those improvements underway.”

The work will be carried out in the early morning, causing as little disruption as possible, reducing the noise disturbance, and allowing the pier to open to the general public as normal. Once the support has been strengthened, work will start in autumn to build the new toilet block

The toilet block is one of several initiatives taking place to improve the pier, following the council’s cabinet agreement to invest in the tourist attraction. The Royal Pavilion is now able to offer sit down meals following kitchen, bar and serving area improvements. Early autumn will see the arrival of the new electric pier trains, replacing the existing diesel trains which have been running since 1986 with eco-friendly trains, designed in heritage green and cream following a public vote. Then, as well as the viewing platform above the toilet block, additional wind breaks will also be put in place.

The council’s cabinet have today agreed to undertake a full tender exercise to decide the future of the council’s next recycling, waste and cleansing contract from October 2023 onwards. Southend-on-Sea Borough Council …

Eligible hospitality, leisure and accommodation businesses in the borough of Southend-on-Sea are now able to make an application for an Omicron Hospitality and Leisure Grant. Southend-on-Sea Borough Council …

Due to the impact of covid on some of our crews, there are some delays in the recycling and waste collection service. We apologise for any inconvenience caused. Southend-on-Sea Borough Council …

Nearly 2,000 vulnerable children and young people will have a Christmas present to open on the big day, thanks to the incredible generosity of local residents and businesses. Southend-on-Sea Borough Council …