A group of travellers has left a park in Langdon Hills.

The travellers, who pitched up at the Great Berry park, on August 4, left on Friday evening, around 5.30pm, after police issued a Section 61 on the same day.

The same group had driven two miles across Basildon after being moved off land near to the Sporting Village and Gloucester Park.

The Echo has been told human waste has been left behind in nearby bushes, and Basildon Council officers are repairing broken bollards.

The bollards are believed to have been broken when the caravans, which totalled around 30, arrived at the park.

This same group were reportedly at Beacon Field Country Park in Langdon Hills earlier in July, days after driving up the A127 from Southend Rugby Club.

Kerry Smith, deputy leader of Basildon Council, is pleased the group has moved on, saying: “Thanks to the work with us and the police, they’ve left.

“If we had left it in the hands of the traveller unit, they would have been here for ten more days.

“Police told them to leave Essex altogether. There’s no signs of them in Basildon at the moment.” 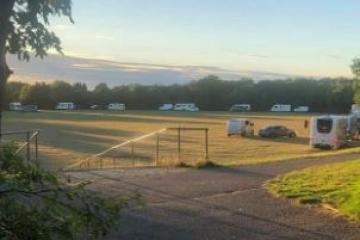