ESSEX Police say people are being told to leave Old Leigh tonight as officers stop crowds from gathering and growing in size.

Southend police posted on their Facebook page officers are “taking a proactive approach” to prevent the same disorder as last night.

It comes after a dispersal zone was set up which gives power to order people to leave the Old Town and surronding areas.

The Southend police spokesman said: “People are being dispersed from Old Leigh.

“Officers are stopping crowds from gathering and growing in size.

“We are taking proactive measures to prevent the same disorder that occurred last night.

“The group spoken to were in good spirits and were cleaning up their own rubbish before leaving the area.”

Officers were called to High Street, Leigh, on Friday night after hundreds of people had gathered, loud music was playing and bottles were being thrown.

After hearing plans are in place for a second party tonight, a dispersal order was been put in place between noon and midnight.

The order covers all areas of Two Tree Island including the access road to the island.

Chief Insp Ian Hughes, District Commander for Southend, said: “I was disappointed to see the volume of people in the High Street, Leigh, last night, however it is important to acknowledge that the majority of people continue to comply with social distancing.

“As a result of the gathering and information we have received, we have dispersal order powers in place in the area highlighted.

“The vast majority of people in my district have been doing the right thing and sticking to the Government guidance and we want to thank them for that.

“We continue to engage with the public, explain the Government guidance, and encourage them to do the right thing and our officers continue to use their discretion and judgement in these situations.”

While enforcement is a last resort, my officers will take action if necessary

A car was damaged in the Friday night party and a man wanted by another police force was arrested for burglary offences.

It is the second dispersal order in a week for the seafront after the powers were used in Thorpe Bay following a fight where a car was driven into a crowd of people.

No enforcement action was taken as a result of that.

Anyone who sees any anti-social behaviour should call 101 or 999 in an emergency. 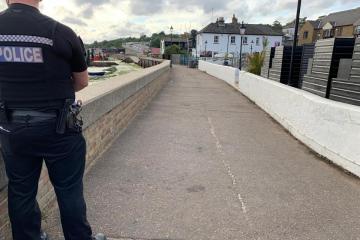