Hadleigh Castle in Southend on Sea

The romantic ruins of a royal castle overlooking the Essex marshes.

The barbican and two striking drum towers – one later used by Georgian revenue men looking out for smugglers – are part of Edward's substantial building works during the 1360s. 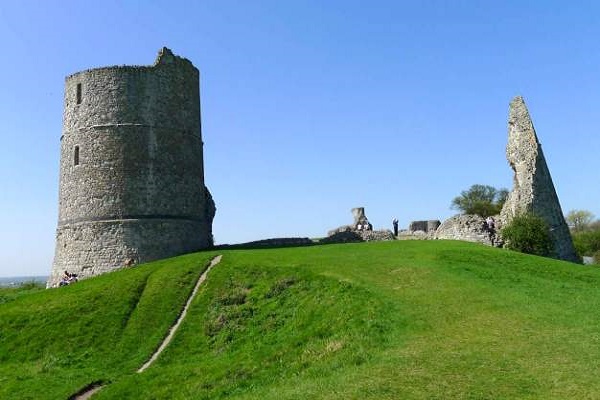 Hadleigh was granted to Hubert de Burgh in 1215 by King John. Hubert had distinguished himself in Royal service when in 1204 he had mounted a spirited, but unsuccessful, defence of the great stronghold of Chinon in Poitou from a French army. He spent several years in captivity but upon his return to England he continued to rise in prominence remaining a strong supporter of the King despite the outbreak of the first Baron's War in 1215. When these magnates invited Prince Louis of France to come to England to take the throne, Hubert successfully defended Dover Castle from the Franco-Baronial army. Upon the death of King John in October 1216, Hubert transferred his loyalty to the new King, 9 year old Henry III. At the Battle of Sandwich (1217) he defeated a French Naval force deployed to resupply Prince Louis. His victory here was key to ending the war and his success led to further rewards - including being raised to Earl of Kent in 1227 - and it was against this backdrop that Hubert built Hadleigh Castle.

Despite his earlier service, Hubert's rise to prominence came to an end in 1239 when he quarrelled with Henry III and forfeited his lands. Hadleigh Castle was taken into Royal ownership although it was neglected until the fourteenth century. This lack of attention was compounded by subsidence caused by the unstable clay on which the castle had been built. In 1273 the castle passed into the hands of Edward I's wife, Queen Eleanor, when it was recorded as being in a poor state of repair. A visit by Edward II in 1311 prompted some restoration work.

~Things to Do and See in Southend on Sea~